The Power of Appreciation and Recognition Programs 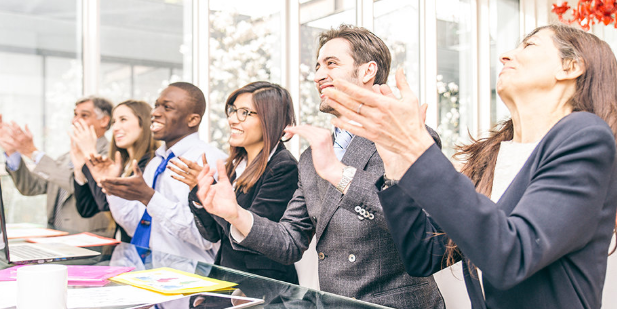 Remember the first ever gift you made at school or purchased on your very own for your mother or father or special someone? Do you recall their oohs and ahhs of appreciation and your sense of pride? The utter satisfaction?  Recognition makes us feel good. It placates our egos. It also gives others watching from the sidelines something to strive for too. The proliferation of televised entertainment award shows attests to this.

Recognition well played, plays right into the hands of organizations gaming to make strong engagement points with their employees.  A great many people have built lucrative businesses out of other organizations’ recognition programs by furnishing watches and clocks, employee travel incentives and mementos of all sorts.

There’s something to be said about the power of appreciation

What so many organizations fail to recognize though, is the power of recognition when regularly doled out for exemplary day to day activity. The muscle power behind thoughtful low-cost/no-cost acknowledgement. So many opportunities to engage and inspire – lost unwittingly.

Everyone experiences an undeniable boost when they’re acknowledged for a job well done. Yet a 2016 Gallup workplace survey revealed:

Interestingly, 17% cited “other” as the source of their most memorable recognition. One of the most striking “other” stories of recognition involves Indra Nooyi, the Chairman and CEO of PepsiCo.

In an interview with CNBC Nooyi explained when she first became CEO she visited India to see her mother.

“When I got home a stream of visitors and random people started to show up. They’d go to my mom and say, ‘You did such a good job with your daughter. Compliments to you. She’s CEO.’ It occurred to me that I had never thanked the parents of my executives for the gift of their child to PepsiCo.”

Every year since her appointment in 2006 Nooyi writes more than 400 letters to the parents of employees, expressing her gratitude; opening floodgates of emotion from parents and employees alike. The second largest food and beverage company in the world in net revenue, with 264,000 people globally, Pepsico is often studied for its recognition programs and advances in employee engagement.

Nooyi’s letter writing campaign is a boon to the multi-national’s efforts. It also undoubtedly contributes to her strong leadership approval rating.

According to Mike Byam, managing partner of a firm specializing in employee recognition programs

The bottom line when it comes to recognition programs

What’s more, BambooHR reports nearly one-third of employees would rather be recognized in a company-wide email from an executive than receive a $500 bonus. Despite these statistics and others like them, 32% of CEOs invest no time in employee recognition.

HR professionals, be mindful. Enlighten your executive teams and people managers about the power of appreciation. Give credit where credit is due.

Remember that place of honor your childhood gift received? Give an employee’s gift of exemplary effort the acknowledgement and respect it deserves too. Bring awareness to the practice of acknowledging individual and team contributions.  Promote praise. Make it an organizational-wide goal to create a recognition-rich culture. Be it an official recognition program or informal interaction, frequent and sincere accolades are valued and valuable.