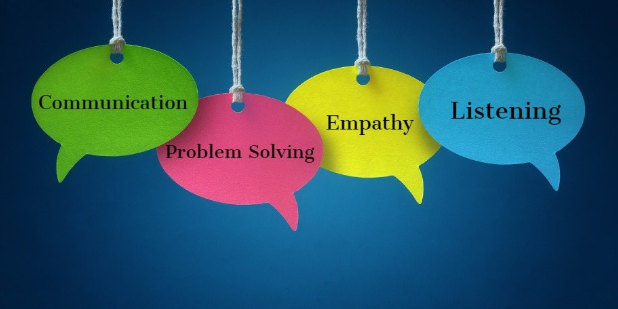 Nasty office politics, difficult managers, gossipy colleagues; together or alone each of these can fester and brew into a downright toxic, counter-productive work environment and poor employee engagement. We all wish for world peace. But let’s face it: how is that ever likely if we can’t even manage to get along at work? That’s where employee soft skills come into play. In a big way.

According to an Accenture study, people leave their jobs for four main reasons:

Each of these reasons is linked to soft skills. Bad managers and internal politics are obvious instances of soft skill deficits. Lack of empowerment is often connected to risk-averse micro-management which usually starts at the top and cascades down. Lack of recognition is commonly associated with people leaders who lack respect for employees and are unschooled in the power of acknowledgment.

In a Wall Street Journal survey of over 900 executives, 92% indicated soft skills such as communication, curiosity, and critical thinking are as important as technical skills, yet 89% of those same executives reported they have a very difficult or somewhat difficult time finding hires with soft skills.

If it’s difficult now, it’s going to become even more so in the future. A 2016 report by McKinsey & Co. estimates technology will impact some 60 percent of all occupations as we know them today. Google guru Jonathon Rosenberg believes jobs relying on strong cognitive abilities and analytical thinking will be more difficult to replace with AI. But those jobs less likely to be automated will increase demand for soft skilled talent. And a Deloitte study forecasts two-thirds of all jobs will be soft skill intensive by 2030.

What Employee Soft Skills Should You Be Looking For?

Dr. Peter Hatherley-Greene, a certified Emotional Quotient and soft skills trainer tells an intriguing story about Google, an institution founded on the premise that only technologists understand technology. That hypothesis was tested in 2013 “by crunching every bit and byte of hiring, firing, and promotion data accumulated since the company’s incorporation in 1998.” Turned out the six top characteristics of success at Google were all soft skills:

People across geographies and time zones are connecting to one another faster and simpler than ever using ever-advancing technologies.

More and better efficiencies are being realized through automation and AI.

But the quality of customer, employee, and other stakeholder experiences is where human beings and intelligent machines meet.

Soft skills, strong communication skills chief among them, are the harbinger of keeping pace with change and charting new successes.

How to Find Candidates with Soft Skills

Plan. Craft a thoughtful list of questions that are outside the typical competency box. Test listening and verbal communication skills, collaborative team work and problem-solving abilities by describing challenging scenarios and asking how the individual would tackle each situation. Find out what the candidate is currently reading and why to get a sense of their interests and interest in learning. Ask zany questions to give creativity and on-the-spot innovation a chance to shine.

A superb candidate interview resource is the Proust Questionnaire, a parlor game popularized by Marcel Proust, a late 19th / early 20th-century French writer, who believed an individual’s true personality is revealed by answering these questions. Here’s a sample: